It’s all about the vowels 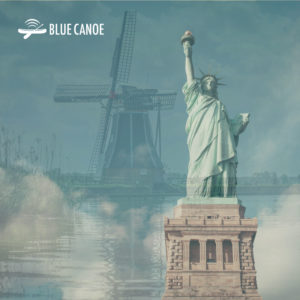 One of the most common questions we get at Blue Canoe: why do we emphasize vowels? And why do we not talk about consonants? To answer, let me tell you my story.

Five years ago, I made the decision to move from The Netherlands to the United States. I had just graduated from high school and I was accepted into college. That is extraordinary, don’t you think?

Indeed, it was extraordinary, however, there was only this minor little boundary that made me frightened. Me and the English language have a complex relationship. Choosing to move and live in the U.S. made me realize I truly require my English skills.

My first time being exposed to the English language was in middle school, learning a couple words here and there but nothing quite special. In high school I was a decent student when it came down to reading and writing exercises, but when the oral exams came up, my grades would drop drastically. This made me afraid of the adventure I was about to begin, giving me flashbacks to high school.

Despite the fact that I was scared, I took on reasoning “how terrible could it be”? I am not going to lie, it was hard, but repetition is everything. When you’re forced to speak it every single day and are open for criticism, you can improve incredibly fast.

“When you’re forced to speak [English] every single day and are open for criticism, you can improve incredibly fast.”

I realized that in order to improve the different sounds of English, my ear needed training. I had to figure out a way to train my ear in a way that it could distinguish different sounds. The English language has two different kinds of letters: consonants and vowels. Consonants are the non-vowel sounds. Most of the consonants only have one sound, for instance, there is only one way to pronounce a /d/. “Some consonant letters do make a few other sounds, as in the letter ‘c’ which can represent the /k/ or /s/ sound, but most are ‘what you see is what you get,’” says Karen Taylor, co-creator of the Color Vowel System. They made my life a little easier because they are a little bit simpler in regards to the sound they make. On the other hand, vowels can change sound in regards to different words.

For me to improve my pronunciation meant I had to accept the fact that I would fail before I could succeed. I told my friends they could help me to correct my English. Despite their help there was one word I just couldn’t figure out how to pronounce. They loved to make fun of me when I tried to pronounce the word ‘three.’ I just couldn’t make sense of how to utilize my tongue beneficially to express this word. In The Netherlands, we are not used to twisting our tongue in the correct shape to pronounce the ‘th’ sound. The best I could do was ‘tree’ until one of my friends told me the sound is made by putting the tongue against your upper teeth and release the sound when exhaling a breath. According to Karen Taylor, “Consonants are easier to describe because they are produced by specific articulatory features; you can describe where your tongue, lips, and/or teeth should be touching.” My friend was right and this was exactly the feedback I needed to hear to help me.

The confidence I gained from improving my pronunciation in regards to consonants, is tremendous. However, I am never too old to learn and there is always room for improvement. I believe this positive mindset and my introduction to the Color Vowel System will help me tackle my next obstacle: vowels.  I realized learning the English language takes time and that repetition brought me to where I am today – a fluent English speaker with a Dutch accent living and working in the United States within only five years.