The Habit of Stress 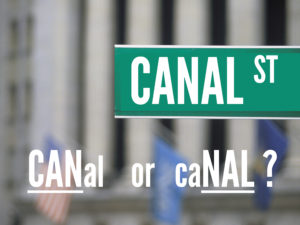 Twenty years ago, before we all had smartphones, a student of ours, Naoki, spent a weekend in New York City. Standing on the sidewalk and feeling lost while looking at his map, he asked one person and then another, and yet another for help. Each time, he was dismissed: “I don’t know,” answered one. “No idea,” answered another. The third didn’t even bother answering.

Undeterred, Naoki thought about his English pronunciation and what he’d recently learned in class. He decided to try something different. He asked the same question one more time, but this time, it worked! “It’s right over there,” the man said, pointing down the street.

What had Naoki done? Without changing the words or the word order, Naoki used stress. The time Naoki spent on the stressed vowel sound is what made the difference between being understood and literally being ignored.

“Where is Canal Street?” This was Naoki’s question. It seems simple enough, right? And yet, when said without the right amount of stress, the question was incomprehensible to his English-speaking listeners.

Each language has its own special rhythm.

Syllable-timed languages give approximately the same amount of time to each syllable in a word and in a sentence. Spanish, Mandarin, French, and Japanese are all syllable-timed.

The first three times Naoki asked his question, he used the syllable-timing of his native language, Japanese, and the result was painfully obvious: I don’t know. No idea. Silence.

When Naoki spoke again, he used his hand, a bit like an orchestra conductor does, to spend time on the second syllable of “canal.”

This story is a bit strange, isn’t it? After all, Naoki already knew about stress. He had learned about it recently, and he had practiced using his hand to improve his stress. He also knew how important it was to being understood. So why didn’t Naoki use stress the first time he spoke? Why did he have to make the same mistake three times before correcting himself the fourth time?

Something bigger was at play in this situation. Naoki was lost, and he was alone. He needed to ask strangers for help. This was a stressful situation. In this state of nervousness, Naoki’s heart rate increased, and his brain defaulted to the rhythm of his native language, Japanese. The first three times Naoki asked the question, he was essentially speaking Japanese with English grammar and vocabulary. His pronunciation sounded not like English, and his listeners’ reactions confirmed this.

Naoki’s story teaches us that learning about stress is not enough, nor is learning how to perform stress. What Naoki still needed, and what Naoki hadn’t yet acquired, was a habit for using stress.

The human brain is remarkable in its capacity to develop new habits when the strategies are right. That motion Naoki made, using his hand to mark time, made his English sound like English. Naoki’s path forward was literally in the palm of his hand, but he wasn’t in the habit of using it.

That was twenty years ago. Today, we’ve packed all of that learning into Blue Canoe, which now sits in the palm of your hand. When combined with your Open Hand gesture, that ten minutes a day with Blue Canoe can create what you need on your path forward: the habit of stress.